Not Your Typical Spring Break

by Candlewood Church
in Ministries, Missions, The Rock
Comments 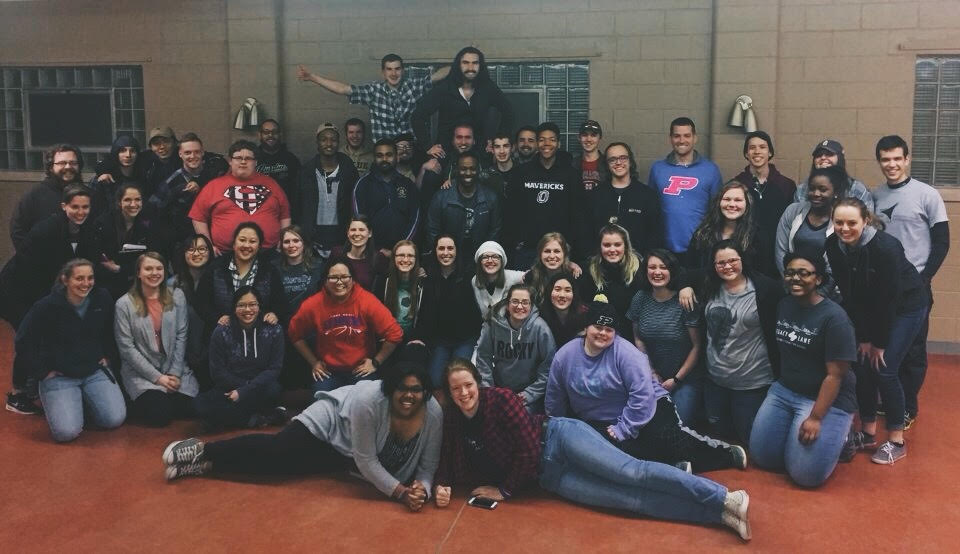 This past March, The Rock from Lincoln and Omaha embarked on an eight-hour road trip to West Lafayette, Indiana. Not where most college students would think to spend their spring break – no beaches or landmarks in sight.

You may never have heard of West Lafayette, but you may have heard of Purdue University, with a student population of about 40,000 located in this city of a little over 30,000. The university is where our Rockers spent most of their time while visiting Grace Campus Church in West Lafayette, as they went out every day for three days and shared the gospel with students on campus.

It was both stretching and encouraging – as talking about spiritual things to strangers usually is. During tie-downs, students shared how much they grew in confidence to share the gospel, to talk to strangers, to tackle conversations they normally wouldn’t, and approach people who intimidated them. As they faced their fears, they began to feel more fearless.

“I went sharing with Pastor Tom’s wife, Jenny. I was super nervous because I felt a lot lower on the knowledge scale. For some reason, I decided we should share with these three girls, an agnostic, a Hindu, and a Catholic. None of the girls were Christians. However, two of them came close to accepting Christ by the end of the conversation. It was super encouraging, and it re-energized me for the rest of the week.” – Zach

Many hearts were softened and brought closer to Jesus during this time, and at least one person professed faith in Christ. While most people obviously did not get saved on the spot, they were usually willing to sit and engage in lengthy conversations. Even if they weren’t open to the gospel, they were open to talking to strangers about spiritual things. Most people are curious why a bunch of college students from Nebraska would choose to spend their spring break talking to people at a University eight hours away from their own, and are willing to take time to listen to the answer.

“This was my first Rock Spring Break trip. When I first heard about it, I was confused why we were going to share the gospel at another college campus while we were on spring break. However, during this trip, I was definitely moved by God. I felt what it feels like to have the Holy Spirit move through you by speaking through you and bringing you to the right people. I truly believe everyone I talked to on Spring Break was not coincidental. Even if they were not interested in what I had to say, I believe that a seed was still planted. I was very blessed to witness one girl give her life to Christ after talking to her. God gave me a lot of confidence, and he showed me that I need to get out of my comfort zone to be a true disciple of him, and that stepping out of my comfort zone is what I will have to do for the rest of my life in order to help bring others to Christ. God will give us opportunities to share about him and it’s up to us to not miss those.” – Lindsey

Not only did students get to practice sharing their faith with those from a wide variety of backgrounds, they got to see old friends and make new friends. Grace Campus Church was incredibly welcoming, and Rockers got to connect with their host families, as well as each other. No matter where you are in the world, it is easy to connect with others who are part of the same faith family. Sharing gospel tracts and personal faith stories with strangers is not the only way to share, however, and one group of women was able to stay with a couple that wasn’t a part of the church. While enjoying their incredible hospitality, these women were able to witness to this couple through their actions and conversation.

“I was encouraged to catch up with Omaha peeps and hear stories of how God is answering prayers through them in Omaha. One thing I enjoyed was getting to know our host family, and I believe we made a positive impact on their lives. Even if it was moving them just one step in the direction of Jesus, I know He is going to use it for eternal glory.” – Priscilla

On the way back to Nebraska, The Rock UNO & UNL stopped in Chicago for a few hours to see the Bean, eat some pizza, and walk the magnificent mile. This more typical spring break location was only a brief highlight at the end of the trip, but I think all of the Rockers would agree that the more meaningful memories were formed prior to this pit stop destination. As believers, we may find ourselves doing things that others don’t understand and that we ourselves don’t expect, but as followers of Christ, these are the kinds of things we will do for the rest of our lives on earth and they will have an impact for eternity.